Nashville, Tennessee is one of the most iconic cities in the United States. It is called “Music City” for good reason.  It is the city where many country music legends have had their starts.  So when you go to Nashville for the first time, you are going to want to enjoy some great entertainment which is easy to find.  You are sure to have a great time in the Nashville bars of Honky Tonk Row.  And the “dress code” for this downtown area is boots and cowboy hats!  So grab your hats and boots and take our advice for the best nightlife in Nashville, TN! 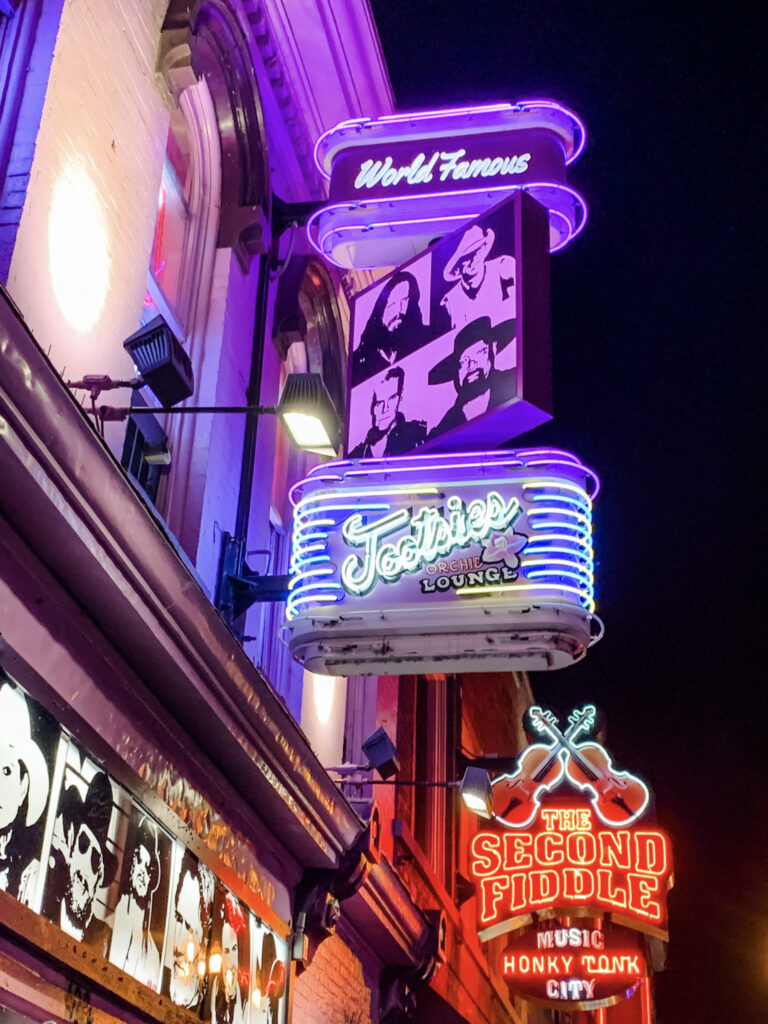 The best nightlife in Nashville, TN starts on lower Broadway where the neon lights will beckon you into the famous Honky Tonks. Each of these bars are three stories high and many offer a rooftop bar where you can sit and enjoy all the sights and sounds of Nashville. 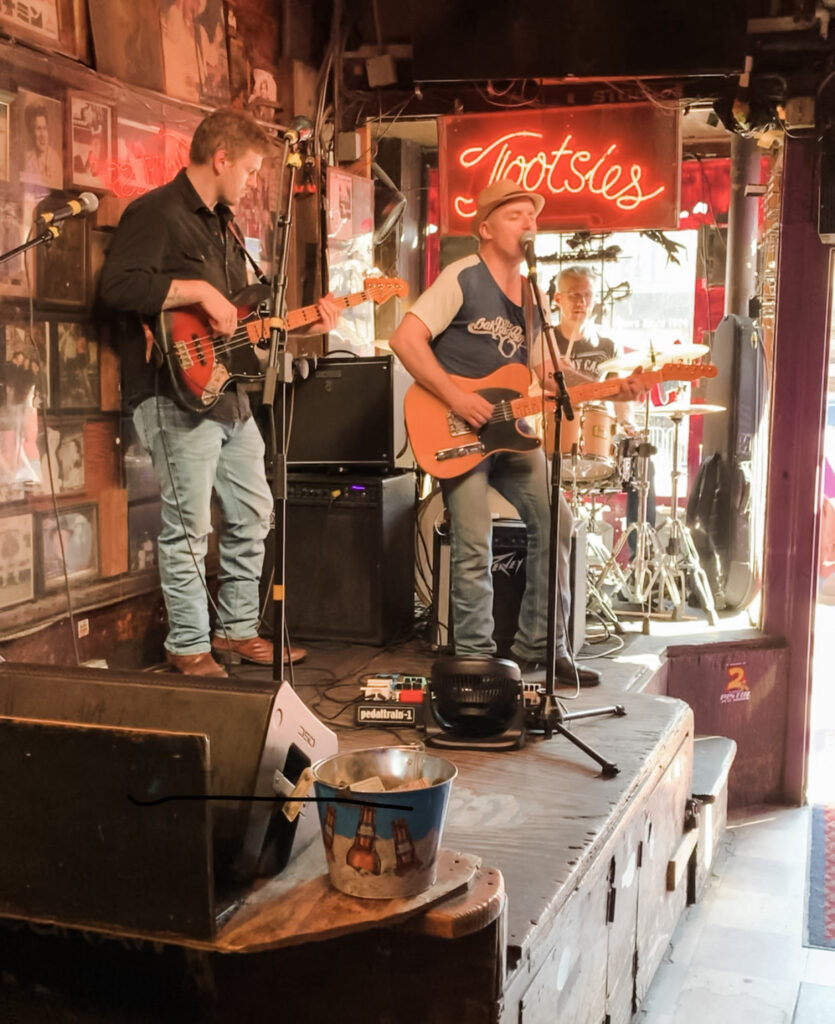 Some of the best nightclubs on Lower Broadway are Robert’s Western World, Legend’s Corner, and the famous Tootsie’s Orchid Lounge.  However, if you go on weekend nights, you will find the crowds to be thick.  But if you go during the day you will find that you can find a seat pretty easily, even on the first floor. 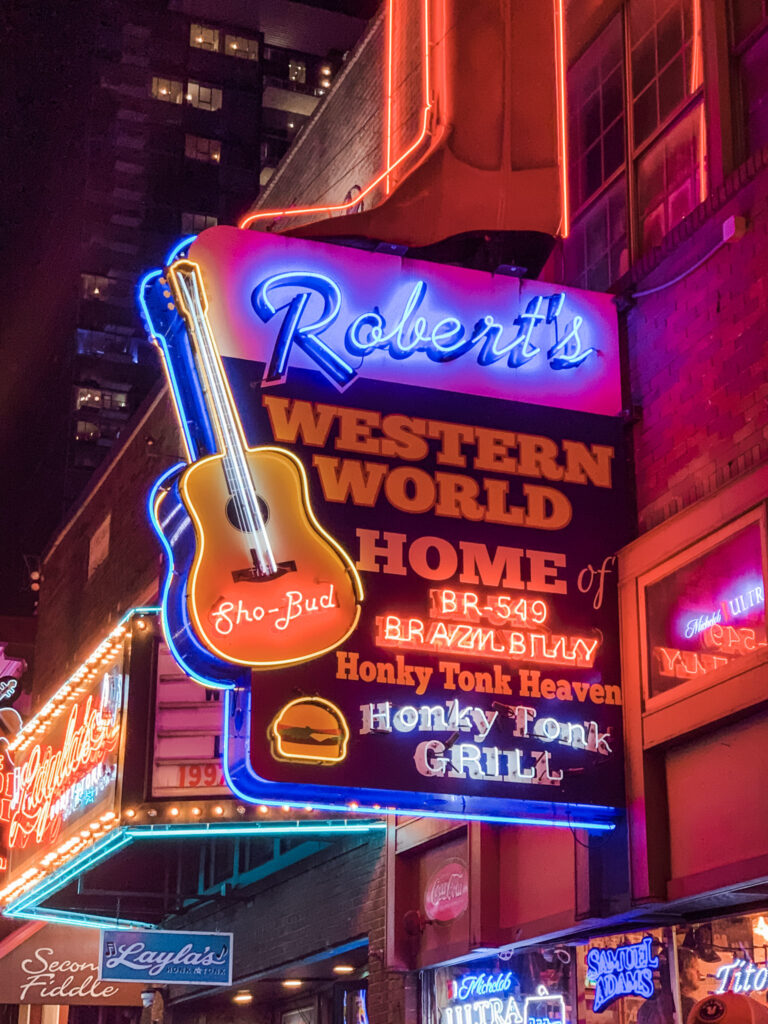 When Andie and I went with our men recently,  we found the crowds to be too dense on Friday and Saturday nights.  But on Sunday afternoon we were able to find a table and sit on the first floor of Tootsie’s Orchid Lounge to listen to some great live music.  We enjoyed some craft cocktails, Tennessee brews, and, of course, whiskey.  We also went upstairs to enjoy the rooftop lounge on a beautiful fall afternoon.  Just remember, that if Broadway is too crowded at night, try back during the day.  The bars open early and there is no cover charge. 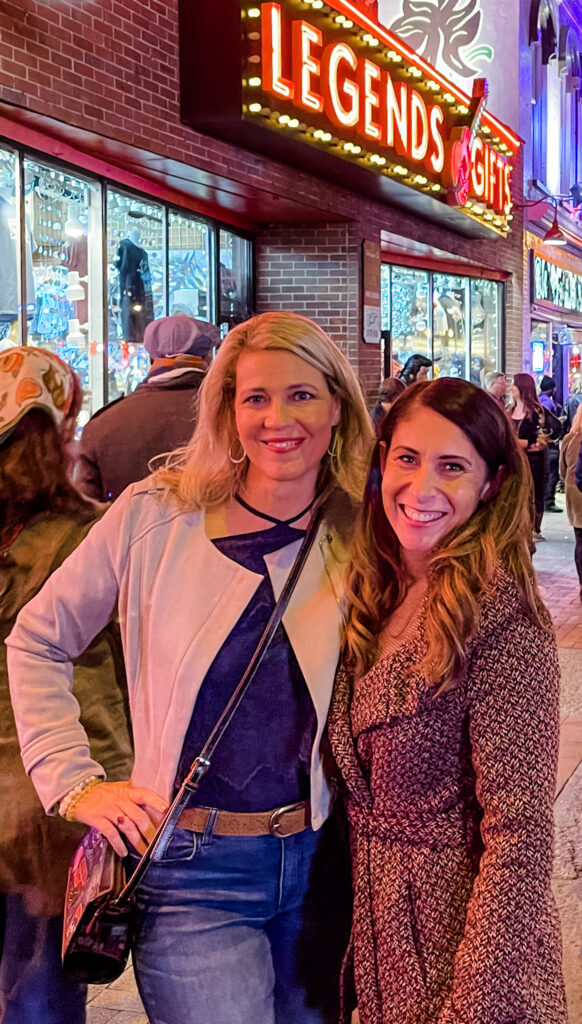 Renee and Andie having a blast on Broadway in Nashville

Finally, one of the most unique things we saw on Broadway were all the unique party busses.  Many of these featured bachelorette parties with music, drinks, and a lot of raucous fun! 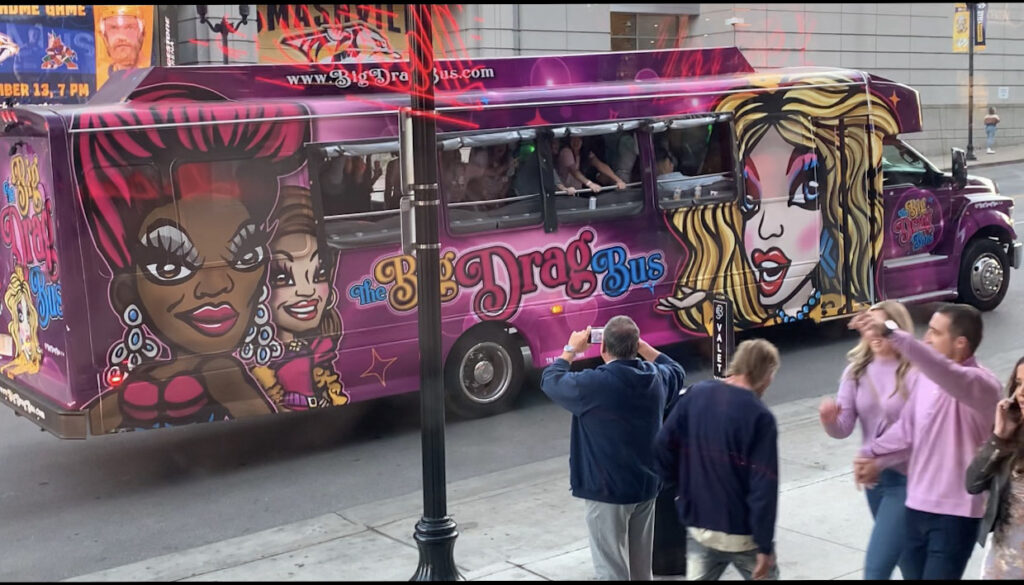 A Party Bus on Broadway in Nashville, Tn

When looking for the best nightlife in Nashville, TN, spending some time on Broadway is a must! 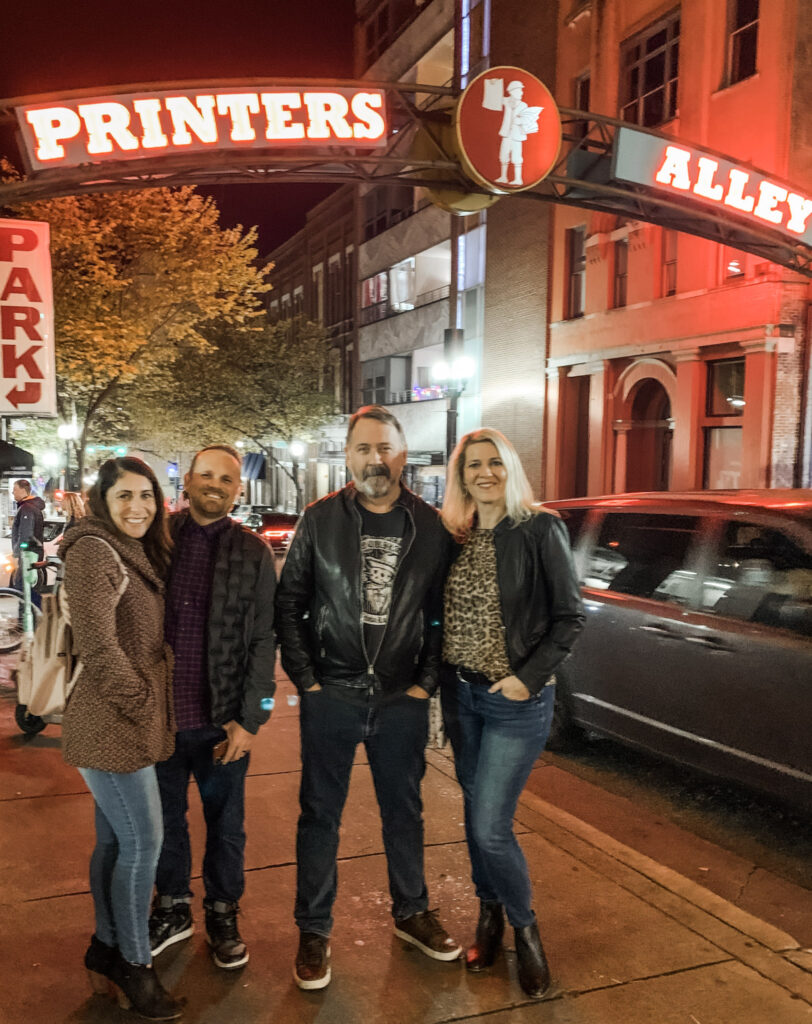 When the crowds of Broadway get to be too much, my suitcase sister, Andie and I like to head to Printers Alley.  From the Honky Tonks on Broadway you would simply go north 2 blocks on 4th street and turn right on Church St.  The signs will then point you to the best places on Printer’s Alley. 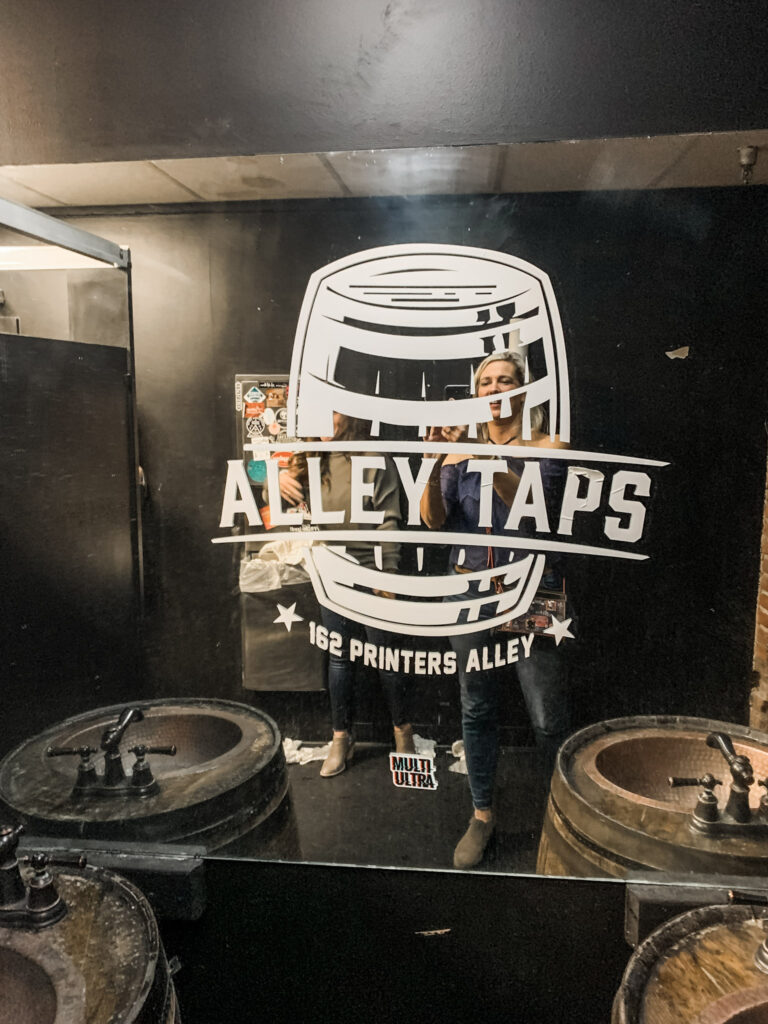 Even the bathrooms at Alley Taps in Printers Alley of Nashville, TN are interesting.

When we were in Nashville recently, we found this hidden bar down the Alley called “Alley Taps“.  It turned out to be a great live music venue.  We stayed for hours, having a good time.  We tried several different craft beers that were made in Tennessee.  My favorite was an amber beer called “Yazoo Gerst Amber“.  It may be a quirky name but it was delicious! Andie settled on some classic cocktails like cranberry and vodka. 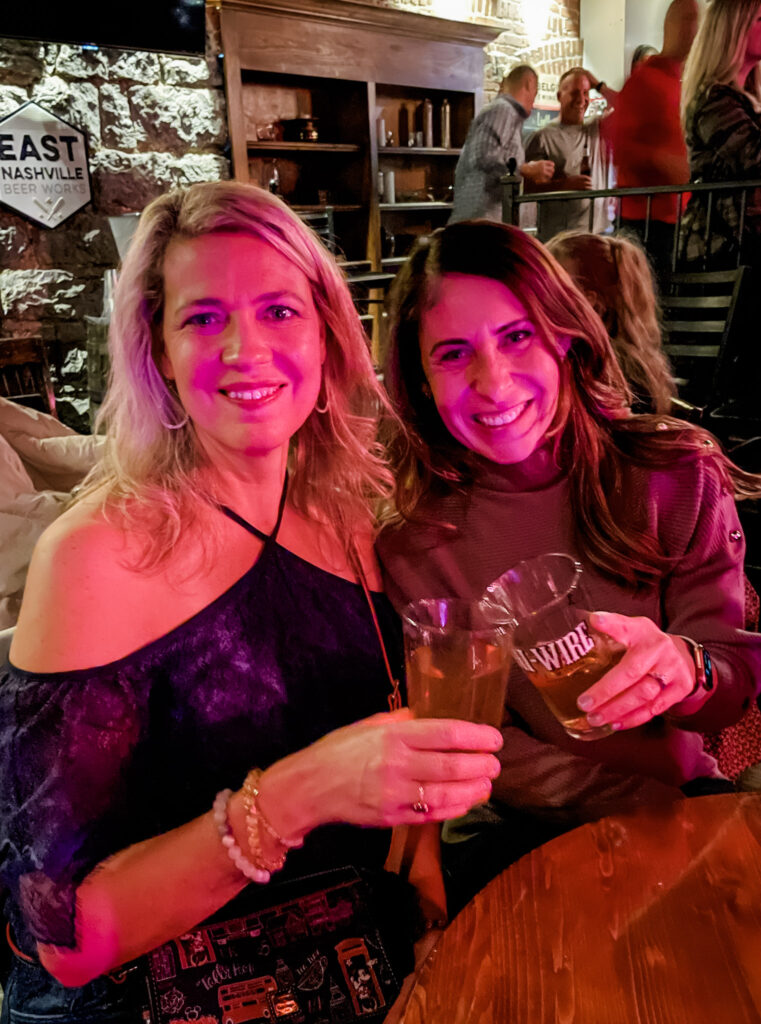 Renee and Andie enjoying some drinks at Alley Taps on Printers Alley in Nashville, TN

We heard a couple different live bands, while a lot of people were out on the dance floor.  Everyone was having a good time. The neon lights of the bars on Printers Alley in Nashville, TN

One of the best things about Printers Alley is that if you don’t like one band, you can just get up and go to the next dive bar and someone else will be playing there.  Even on a Saturday night, it was fairly easy to find a small table at the various  bars.  And for that reason, I thought that Printers Alley would be the perfect place to go on a pub crawl with a group of friends.  And there were plenty of bachelorette and bachelor parties to verify this.  If you want to find the best nightlife in Nashville, TN then we absolutely recommend spending time in the bars of Printer’s Alley. 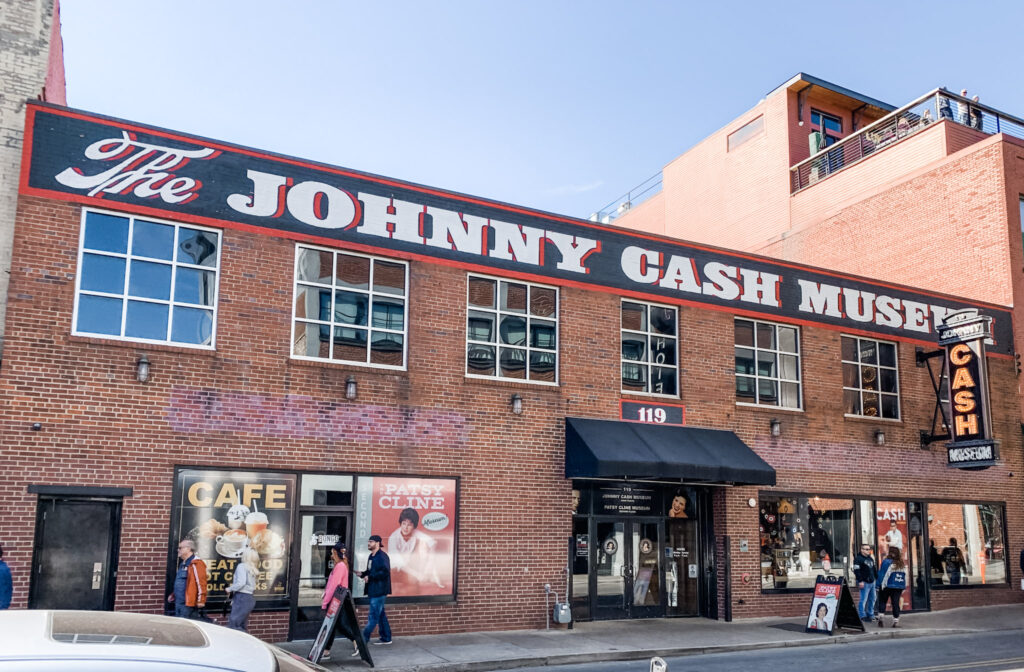 If you are not into the bar scene there is still a lot to do in Nashville.  For example:  There is plenty of history to explore throughout Nashville.  The Ryman Auditorium is an historical music venue that was home to the Grand Ole Opry.  Nowadays you can book a tour to see this historic “Soul of Nashville” or you can check the events calendar to see who will be playing. 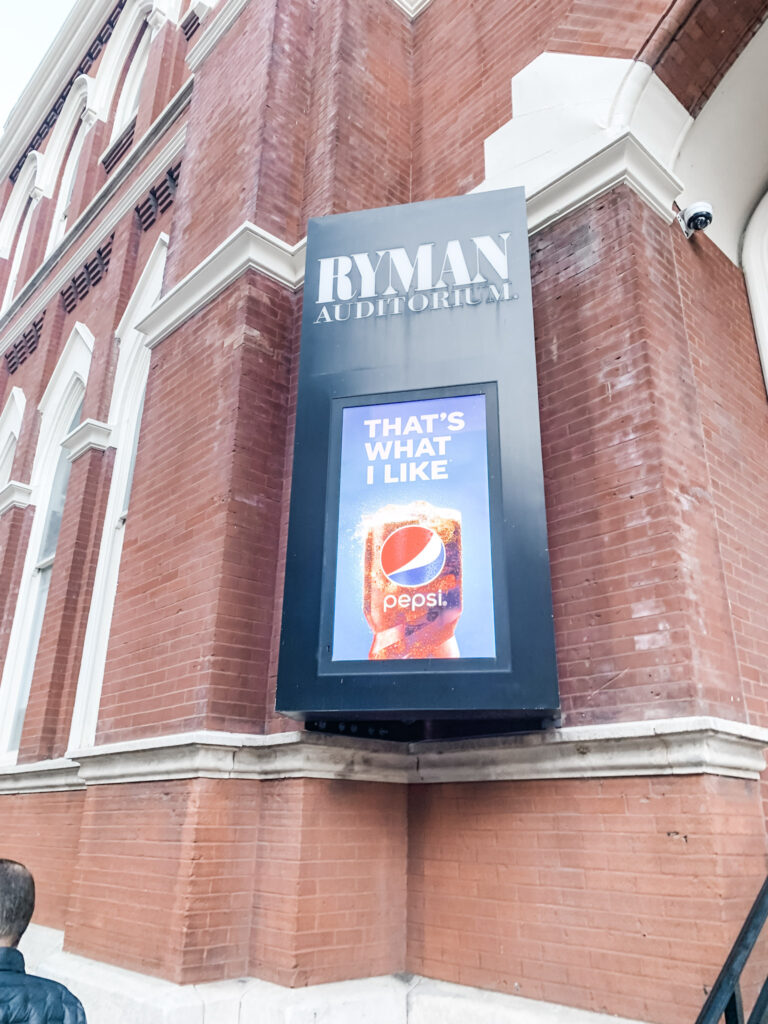 The Johnny Cash Museum is a unique experience to view the history of this iconic country musician.  The museum has an impressive collection of Johnny Cash artifacts, history, and stories.  If you are a fan of Johnny Cash then this museum should be a must on your list.  On the second floor there is also a Patsy Cline museum so you can check out both exhibits while you are at it. 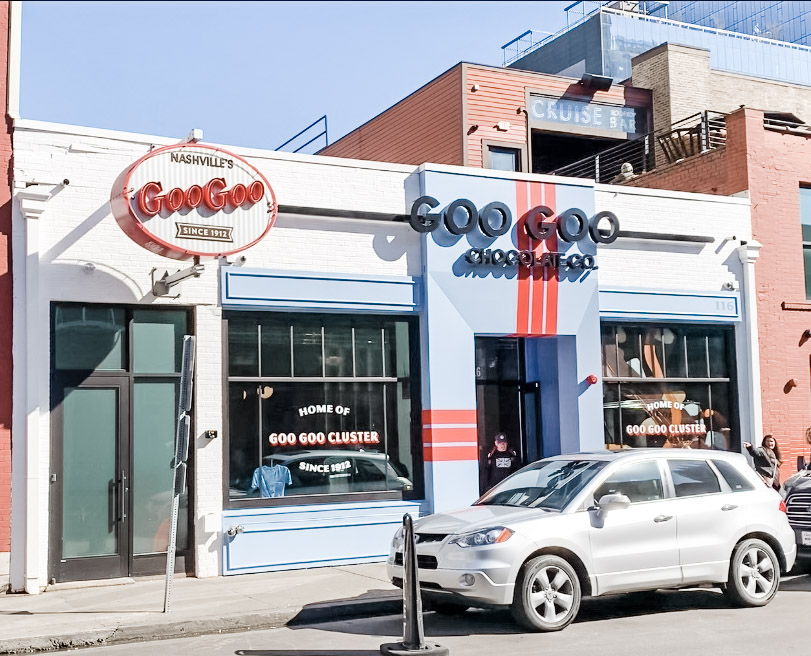 Other things to check out while in downtown Nashville are the great southern candy shops.  For example:  Goo Goo Clusters has a store right across the street from the Johnny Cash Museum.  Goo Goo Clusters are an iconic Nashville candy that was first made in 1912.  It was actually the first “combination” candy bar to be made.  (In other words, more than just chocolate).  When you go in the store, you will first notice the enticing smell of fresh candies being made.  You will also notice that you can have your own candy made fresh!  Of course, you can also buy the pre-boxed versions so you can enjoy them quicker!  A trip to Nashville is not complete without a visit to Goo Goo Cluster. 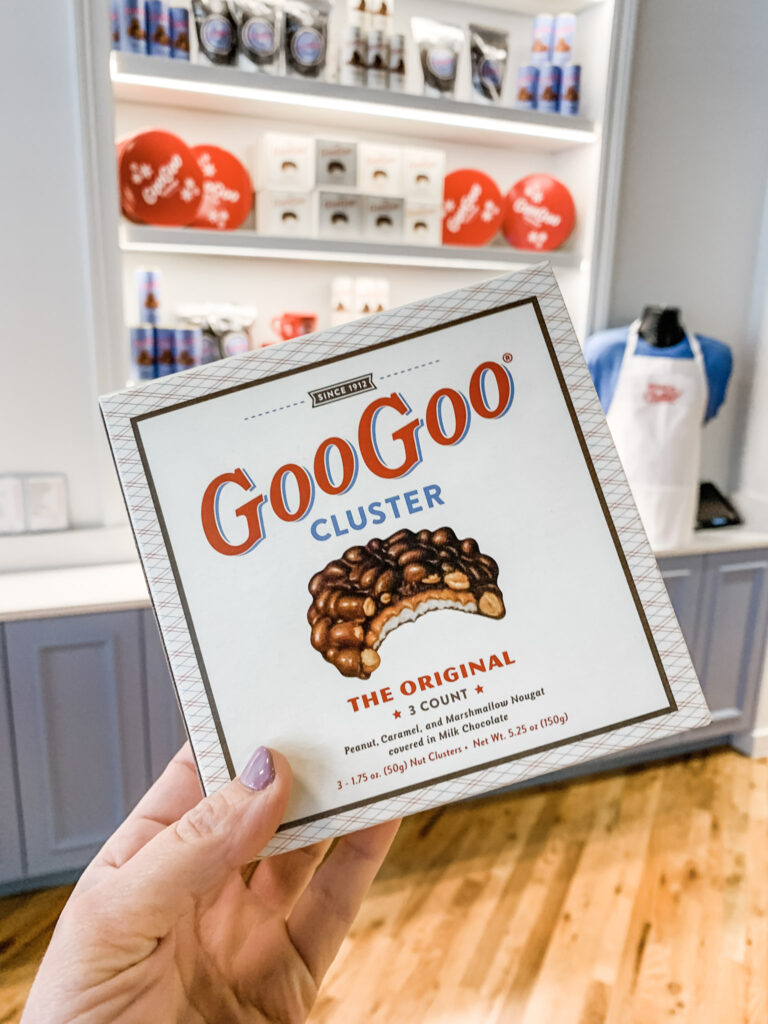 Also in downtown Nashville is the Savannah Candy Kitchen.  Obviously by the name, this store was not original to Nashville but the homemade pralines are certainly a staple of the South.  In fact, when you walk in, you can even get a sample of a freshly made praline.  I’d love to see you resist buying a few after tasting a bite! 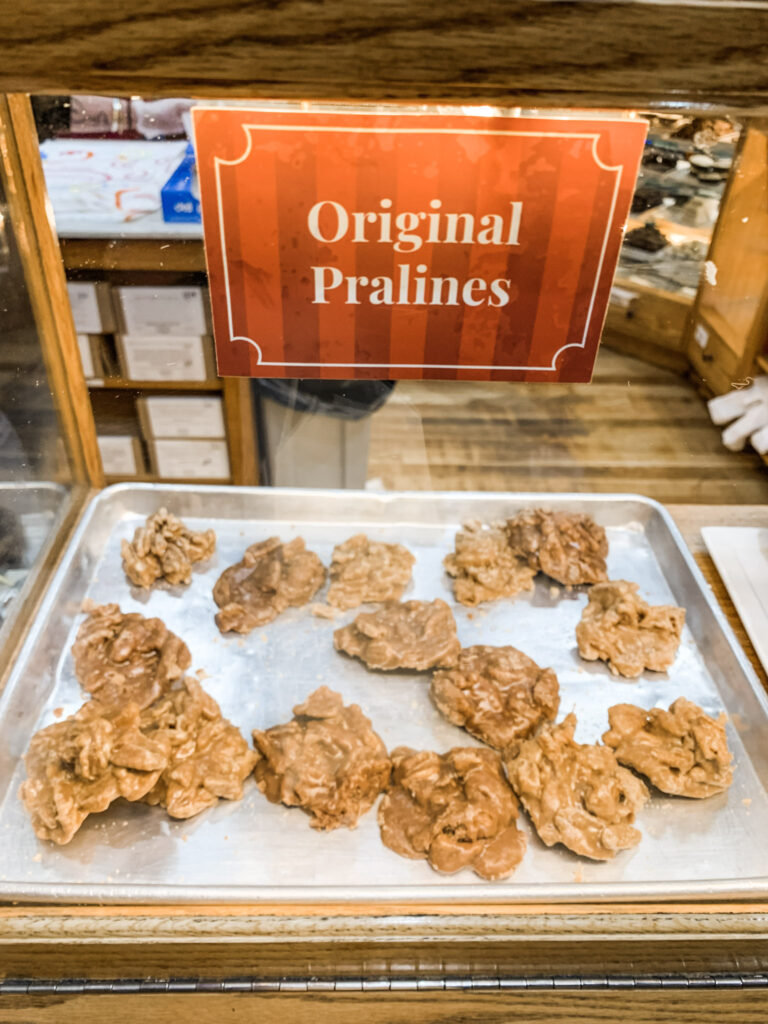 Freshly made pralines at Savannah’s Candy Kitchen in Nashville, TN

If you are not into bars, you are lucky that some of the best nightlife in Nashville, TN can be enjoyed without stepping a foot into a bar! Hattie B’s hot chicken and all the fixens.

When you are in the Nashville area you are going to want to eat.  And luckily there is some great food in Nashville!  The iconic thing that you are going to want to eat is hot chicken!  And a great spot is Hattie B’s Hot Chicken. It really is the best there is.  You will find Hattie B’s Hot Chicken right on Broadway in a shopping center called “5th and Broadway”. 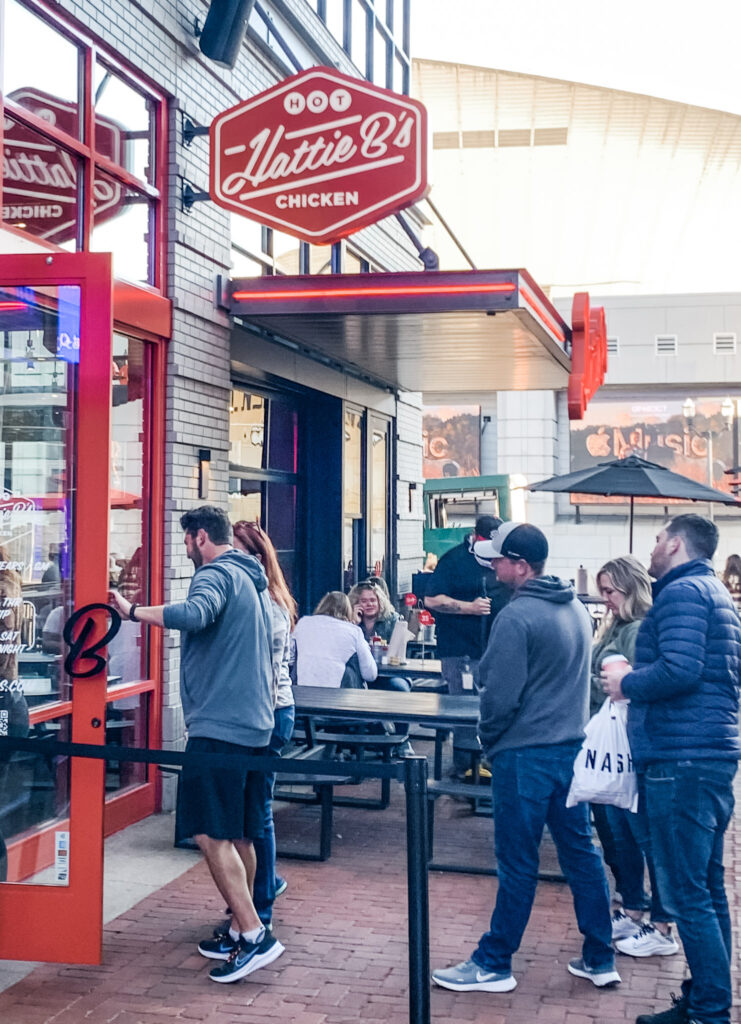 The line for Hattie B’s on Broadway in Nashville

When my husband and I bit into this chicken we both agreed that we had never tasted fried chicken as amazing as Hattie B’s.  And although my husband got it hot, I got it with no spice at all and I thought it was amazing all the same.  When you are hungry on Broadway, Hattie B’s is the perfect place to go.  But just so you know, everyone else feels this way too.  There is always a line outside the restaurant but rest assured that the hot chicken is worth the wait! 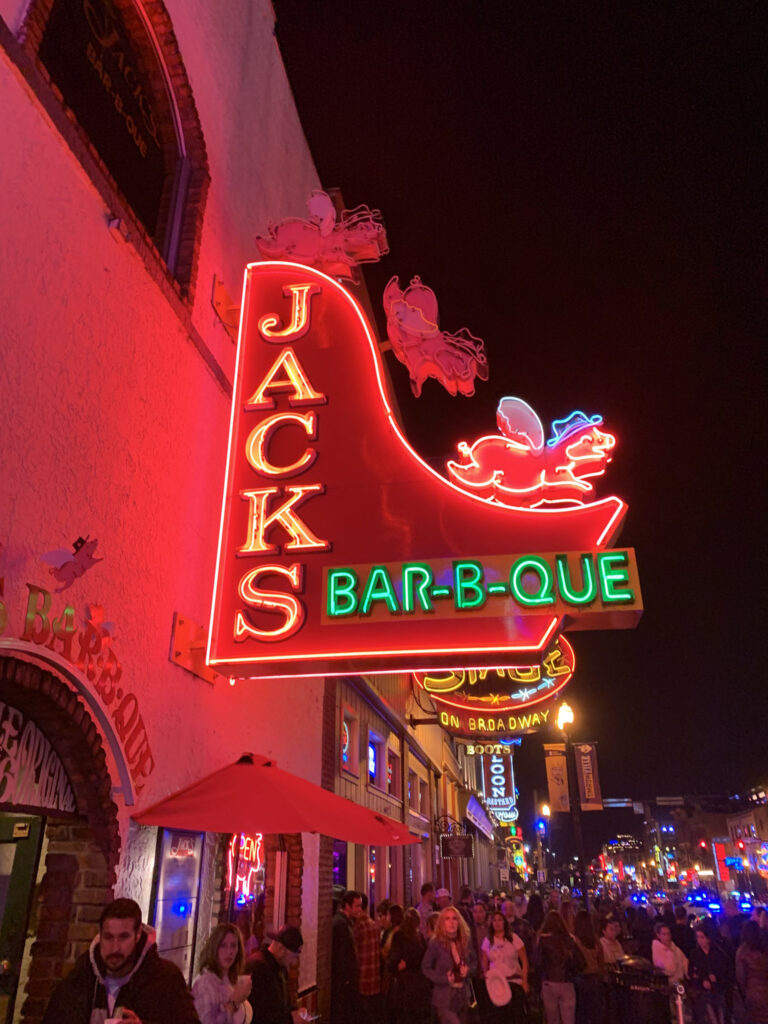 There are also some great BBQ joints in Nashville and some have live music performances.  Jack’s BBQ and Maritn’s BBQ Joint both have some good food and a lively ambiance. 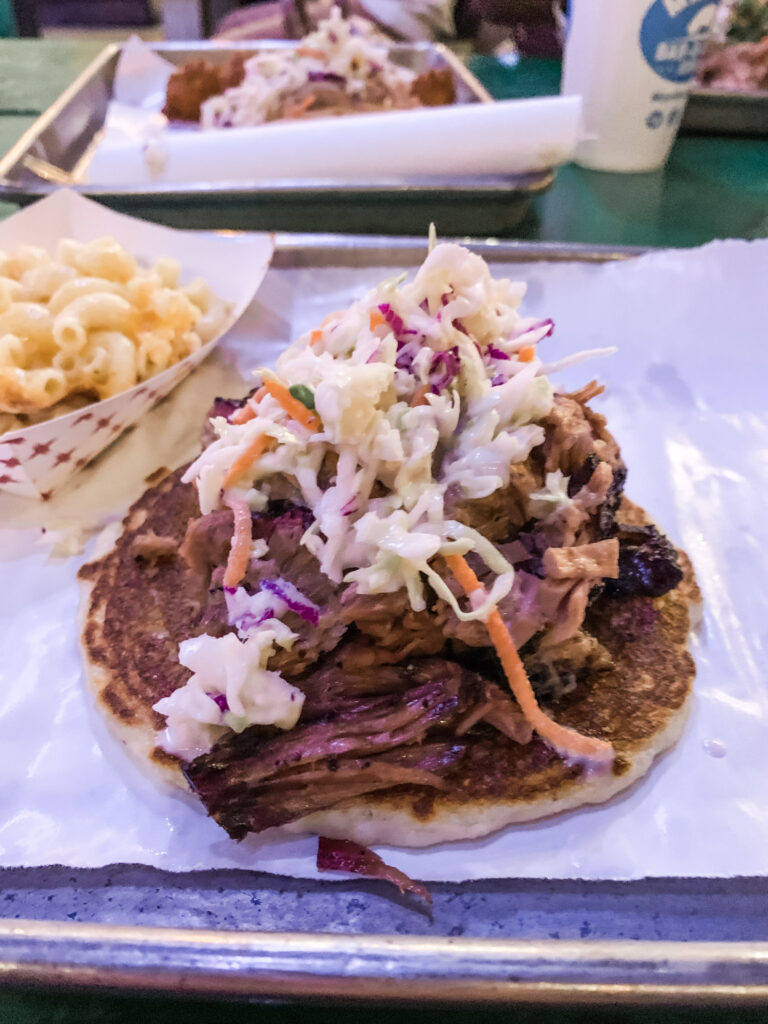 When you are looking for the best nightlife in Nashville, TN, don’t forget about the food!

When you are looking for live country music or just a fun place to explore, it’s hard to think of a better city than Nashville.    And when you go, make sure to use our advice for the best nightlife in Nashville, TN!  Let us know how it goes!

« The Best Day Trips in Wisconsin
Best breakfast in Nashville » 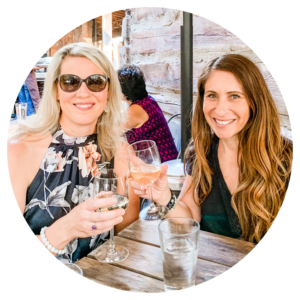